Dogmatics in Outline by Karl Barth 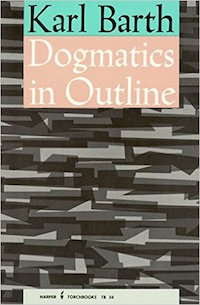 Karl Barth - author of the celebrated Church Dogmatics as well as Dogmatics in Outline - is considered by many to be the greatest theologians (or at least one of the most significant) of the 20th century, likely due to the massive influence (and sheer volume) of his magnum opus, "Church Dogmatics." Barth's theology arose during a time of great anxiety and harsh reality in a century that was plagued with war and suffering during all of Barth's lifetime.

In addition to the Dogmatics, Barth was the primary author of "The Barmen Declaration" and a noted leader of resistance against Hitler and the Third Reich. He is seen as one of the primary founders of the so-called "Neo Orthodox" movement in 20th century theology. Barth's work once again placed the Bible at the center of a theologian's works, which led many to consider him too "conservative," though he was never fully adopted by many within the evangelical community because of his insistence that only Jesus (and not the Bible) was infallible.

Barth's first major theological contribution was his commentary on Romans, written while he was the pastor of a small church, ministering primarily to the working-class, a group whose rights he would continually champion. In this commentary, the themes that would become the backbone of Barth's theology would emerge - the sovereignty of God and Jesus Christ as the locus of God's revelation. Although heavily revised over the years, the Romans commentary remains an important introduction to Barth's writings.

Still, it was his massive 13 volume "Church Dogmatics" that established Barth as perhaps the premier theologian of the last century. Despite its massive scope (over 8,000 pages in English), the Dogmatics remained unfinished at the time of Barth's death. And while it is inaccurate to think of the Dogmatics in Outline as a reduced version or "summary" of the larger Church Dogmatics, the former does serve as a powerful and succinct introduction (along with the aforementioned Romans Commentary) to Barth's works.

It is based on no less an authority than The Apostles Creed, which serves as the outline of the text. And no less a contemporary theologian than Stanley Hauerwas (who recommends that the Dogmatics in Outline be read yearly) argues that this important work "is Barth’s short, but intense, course in how to speak of God in a world that has lost the habits of faithful Christian speech." When we remember that Barth delivered the lectures that formed the basis of this book in a country that had been both literally and figuratively torn apart by war, we are reminded of the urgency and power of the Gospel that Barth so passionately proclaims.