Interested in preparing for seminary studies? If you already know that you are interested in attending seminary, you might be curious about the best way to be ready for seminary. Are some majors better than others? You might be surprised. 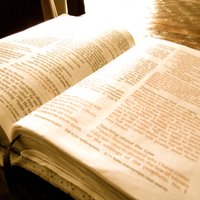 Let me break the suspense for you. There is no definitive "pre-seminary" curriculum. You can major in anything and attend seminary. Yes, you can be a PE major and still go to seminary. For an MDiv degree, you will take introductory courses to all subjects - bible, theology, church history - though the pace and expectations will be heightened. You do not need to have studied these subjects as an undergraduate in order to attend seminary.

That being said, I would argue (and most would agree) that having a well-rounded undergraduate education is perhaps the most valuable asset to pre-seminary studies. Students that tend to do well in seminary are english and philosophy majors, simply due to the level and type of reading done in seminary. Still, one can major in any subject and do well in seminary.

There are classes that will serve you well in seminary if you can take them as part of your undergraduate work. Introductory courses in philosophy and psychology will provide solid background for many of your seminary subjects, as will courses in world history. Of course, taking courses in religion certainly will not hurt, and if you can take Latin, Greek, or Hebrew as an undergraduate, so much the better. Having taken a few of these courses is an excellent step in preparing for seminary.

While majoring in religion or theology is hardly a prerequisite for seminary, people who major in these subjects do have one advantage. Many schools allow students to test out or receive credit for courses similar to ones they had as undergraduates. So, for example, if you took Old Testament Survey and New Testament Survey as an undergraduate, you may be able to get credit for these subjects in seminary and substitute electives in their place. Even if you minor in religion or theology, you may have earned enough credits to place out of many basic courses.

Preparing for Seminary: Planning Ahead

If you have a good idea early in your academic career that you want to attend seminary, then you can tailor your major accordingly. For example, if you're interested in pastoral counseling, then majoring in psychology would be useful. If you want to do doctoral work in church history, then being a history major would obviously help. But if you decide to attend seminary later in life or even after you've finished your undergraduate work, don't fret. Seminary students come from a wide range of backgrounds, academic and otherwise.