Although officially founded in 1969, the history of Gordon-Conwell is really the history of two schools - Gordon Divinity School (associated with Gordon College) and Conwell School of Theology (associated with Temple University). However, by the late 60s, both schools had fallen on hard times. With the financial support of J. Howard Pew (of the Pew Charitable Trusts family) and Billy Graham, the two schools were merged - hence the name.

Harold Ockenga was chosen as the school's first president. Ockenga, who had been influential in the founding of Fuller Theological Seminary, envisioned Gordon-Conwell as an east coast version of the evangelically-aligned Fuller.

The seminary has grown from its original Hamilton campus to three successful extension campuses. Along with Fuller Seminary in California, Gordon-Conwell is considered a powerhouse in graduate evangelical scholarship.

Gordon-Conwell, along with Fuller Seminary, is considered one of the leading evangelical seminaries in the country. The Hamilton campus alone has 65 full-time and part-time faculty, not counting the extension campuses. Not only do students have access to Gordon-Conwell courses, but as part of the Boston Theological Initiative (BTI), students can take courses at a variety of institutions, including Boston College, Boston University, and Harvard University. 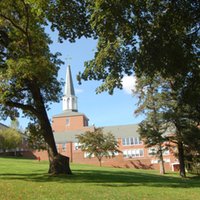 With the Boston metroplex less than an hour away, students at the Gordon-Conwell main campus enjoy close access to a wide array of museums, sporting events, concerts, parks, and other excellent cultural outings. However, there's plenty for seminarians and their families to do in the immediate Hamilton area as well. Every year the seminary publishes the "Out and About" Guide to the North Shore area. This handy guide helps students find everything from affordable restaurants to "Kid Friendly" activities to free activities for seminarians on a tight budget.

Gordon-Conwell Theological Seminary offers generous financial aid in the form of both scholarships and need-based grants. Federal student loans and work study are also available. It is worth noting, though, that scholarships are awarded only at the beginning of a student's career at Gordon-Conwell.