The Cost of Discipleship by Dietrich Bonhoeffer 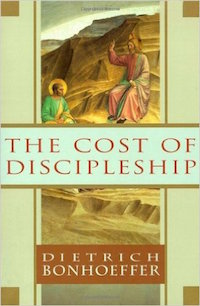 If he had only written The Cost of Discipleship, it would have been enough to secure Dietrich Bonhoeffer a secure place in 20th century theology. Though he does not have the standing or influence of his contemporary Karl Barth, German theologian and pastor Dietrich Bonhoeffer nevertheless is rightly remembered as one of the most significant theological figures of the 20th century. Along with Barth, Bonhoeffer was a member of the Confessing Church, a group that was united in their vocal opposition to the Third Reich and their attempt to transform the the Protestant Church into a Nazi-controlled government entity. Historically, Bonhoeffer is remembered as part of a group who (obviously) failed to assassinate Adolph Hitler, but his most significant contribution to the theological community (aside from his example of courage and sacrifice) is his noted work, "The Cost of Discipleship." 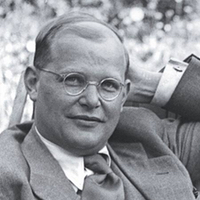 Perhaps the most highly recognized concept from Bonhoeffer's book is his dichotomy between "cheap grace" and "costly grace." Bonhoeffer maintains that the former is "the preaching of forgiveness without requiring repentance, baptism without church discipline, Communion without confession, absolution without personal confession." Indeed, it is "grace without discipleship, grace without the cross, grace without Jesus Christ, living and incarnate."

What is The Cost of Discipleship?

In essence, Bonhoeffer emphasizes the complete surrender to the gospel that is incumbent upon the Christian. The "cost of discipleship" means losing oneself for the sake of Christ. it is safe to say that Bonhoeffer practiced what he preached. He was executed in April 1945 (a mere two weeks before the concentration camp which housed him was liberated) due to his opposition to the Third Reich, including the above mentioned failed assassination attempt.

Despite his untimely death, Bonhoeffer left behind a significant body of work, though he never produced a "systematic" theology as such. His work continues to appeal to a wide variety of readers, with his radical Christocentric focus appealing to a more conservative audience and his emphasis on social justice appealing to a more liberal one. Bonhoeffer was convinced that Christians should not remove themselves from the world but instead transform it from within, something he lived himself for the 39 short years he lived on earth.